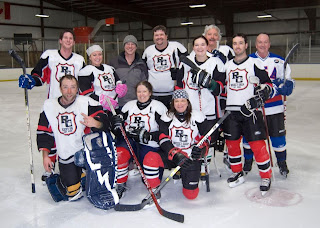 There is always a lot I can write about how hockey has helped me through treatment and beyond.  It is a recurring theme in my blog.  This season has been no different.  This season my captain Stacey and I were able to secure a sponsor for a team in our league.  We got the only hockey store in the area, run by a former LA King, to sponsor our team.  Not bad for the only team with 2 women as captain and assistant captain.

The cool thing about being a captain is that you can draft your team. We were able to see who we wanted during the fall season, to draft for the winter cup run.  My captain and I picked players based not only upon skill level but on personality.  Many of the players we only knew in passing, not anything about them but what we saw on the ice and heard about from other players.

So this winter season, if you look at the final standings for the season we played 10 games, won 3, lost 6, tied 1.  Not the last out of 6 teams, but it was close, we could have been.

Our cup run was short lived, we won 1 game, lost one in overtime, got shutout in the last.

So you are wondering how can it be a championship season? 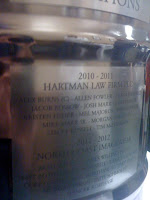 If you envision a team, that has all the right elements, player wise, personality wise, (hat didn't obviously reflect our talent of our team,) then this was it.  There were a few players that Stacey and I had played with before, but none of these people all together.

There is something about playing on a team.  Being a part of something that isn't just you.  The team wins, you win, the team loses, you lose.  It is that simple.

What made this team so special?  Everything about it was the embodiment of team.  We all celebrated our goals, our assists, our victories, our defeats.  Most of the teams I have played on some players do that, but not all of them.   When you watch a professional hockey team, that is what they do, celebrate as a team.

I played on a line with 2 players whose skill level was above mine.  I don't skate as fast as they do, nor do I score as much as they did, but they both made me a better player, something, while perhaps insignificant to them, to me I am forever grateful.

As a cancer survivor, when you go through treatment you celebrate the small victories, because with them there can come huge defeats.

I have played hockey in California and Michigan, played on several teams, with different people, and win, lose or tie this has been the best hockey season I have ever experienced.


Check out my podcast The Cancer Warrior on Empoweradio.com.  Available on demand, on Itunes and on the Podcasts app on your iphone