'Cause I love that dirty water.... 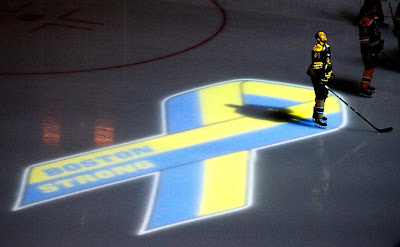 Photo above by Jessica Rinaldi/Reuters

Boston.  Everyone's city. At least after the Boston Marathon bombings on April 15th.

I went to college in Boston.  Spent 4 amazing years there.

I grew up in a small town in New Hampshire.  Wasn't the sports nut that I am now, but we would watch the Celtics (back when Larry Bird was THE man), we would all watch the Pats on Sunday.  God they were terrible, but you would keep watching them every Sunday, no matter how much they disappointed you.  It's the Patriots, its YOUR team.

Growing up where the country was started was a pretty amazing experience.  I didn't realize it at the time, but I realize it now, how special it is.  Having all that history, all that culture.  Everything started where you live. You don't think about it when you are a kid.  But when you are older, you realize growing up where our country started, in one of the 13 colonies, is pretty cool.

Ok I grew up in New Hampshire, 2 hours away from Boston.

I didn't really care about high school.  Looking back I should have done better.  I am smart, but in school people compare you to your siblings, and my brother, 1 grade ahead of me, was class valedictorian.  So I would inevitably get compared to him.  So why should I try if I was always going to be compared to.  Not really a fair thing for teachers to do to a kid.

So I graduated somewhere in the middle of the pack.

Television always interested me so I applied to Newbury Junior College (It's now a 4 year college)  I figured I would get an associates degree and if I liked what I was doing then I would go on to Emerson.

College in Boston.  Our dorms were in Back Bay, on Comm ave, just 5 blocks from the Common.

I loved going to school there. Finally, in a place full of misfits, I fit in.  It was great.

I heard on the radio there were explosions near the finish line.

I wasn't able to get to a TV until about an hour later and then I saw the images, the videos.

Terrorists had placed improvised explosive devices (IEDs) in the crowd at the finish line.  Several hundred people were injured.  3 people would eventually die from their injuries.

The first marathon I experienced was in 1989.  I still remember the hallway of our dorm had boston marathon signs that we had taken.  Signs that were discarded after the marathon.

The marathon was hot that year,  I remember because my friend Sabrina and I walked around and being around all those people and the heat made it even more hot.  It was a fun experience, but I am not a runner, and it is something you should experience at least once, because Boston is THE marathon to run in.

The terrorists took a lot that day, from the people of Boston, and from me they took a little bit of the innocence of the city from me.

It depressed me.  I know the tragedy of it all depressed a lot of people, I get that, but when you are so familiar with a place, when, even though you haven't been there for almost 20 years you are still part of the city.  I think every past college student who studied in Boston knows what I am talking about.  You picture taking money out of that ATM,taking photos of the John Hancock building, walking home buzzed from a party with your roommate.

I felt incredibly lost and helpless.

That's all it took.

4 days to find the people responsible.  Ironically in my college roomate's hometown.  Crazy how small this world is.

I remember when they caught him I felt as if a weight had been lifted off of my shoulders.

Big Papi said it in a speech at Fenway:   This is our Fucking city....

Yeah it still is.

It's a Boston thing, you probably wouldn't understand.


Check out my podcast The Cancer Warrior on Empoweradio.com.  Available on demand, on Itunes, stitcher radio, Tune In radio, Roku and on the Podcasts app on your iphone
Posted by Mel Majoros at 8:58 PM 1 comment: