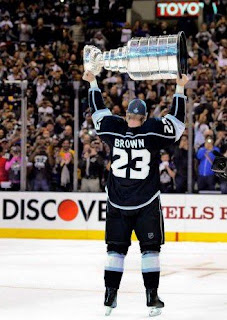 Five.;  In any language it is just a unit of measurement.  Days, weeks, seconds, moments.

For cancer survivors its the magic number.  5 years= remission.

I just had my last oncology visit before my 5 years of being cancer free, which I will celebrate at Red Wings training camp (if there is no lockout)

It is a milestone.

It has been a while since I have written anything.  Over a month.  Not that I haven't had anything to say, just have been busy.

You never forget home ice, the first place you skated, the first game you saw.

I learned to skate late in life, at Pickwick Ice in Burbank, CA, my California home ice..

where I saw my first hockey game. It was awesome

Now if you read my blog you know I am a big fan, and a lot of good things have come surrounding sports, particularly hockey.

The LA Kings, when I first started to get into hockey were in a constant rebuilding year ( starting in 1997)

I still stood behind them though, even though they were awful, when I couldn't get anyone to go with me, because they were so bad or no one was as big of a hockey fan as me.

Even when I moved to Michigan, LA was still "my team"  Yes, I do love the Red Wings, their 2007-2008 stanley cup winning season helped me immensely spiritually and emotionally,  but you never forget your first love.

The Kings were a long shot to win the Stanley cup this year.  Came in 8th place out of 8 teams in the western conference.

No one would have thought they could win.

First time an 8th seed beat the top 3 teams in the division, and beat the eastern conference champions the NJ Devils.

Watching the Captain Dustin Brown hoist the Stanley Cup at Staples was a surreal moment.

Some days I still can't believe the improbable run.

Some days I can't believe all the things I went through with this damn disease.

But here I am.

On my 5th year of being cancer free

The Kings win the cup.

That is a pretty awesome milestone.


Check out my podcast The Cancer Warrior on Empoweradio.com
Also available on Itunes and on the podcasts app on your iphone