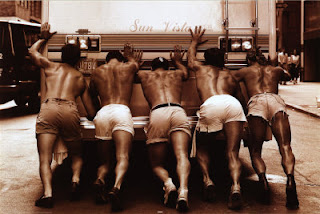 Last week I went out with a couple of friends of mine for a day trip.  We went just a couple hours away to just have lunch, go shopping, girls day out.

I have new hours at work.  I start work at 5:45am and work until noon, sometimes later on during the day.  I should go to bed early, but being a night owl is hard to give up.  I just can't get my ass in bed before 11pm on most nights.

So back to the trip.  It was a great day with friends. Started out about 10am and we got back home around 5 or 6pm.  Great food, a lot of laughs and some shopping thrown in there.

I didn't realize how much the trip to a town just an hour and a half away would wipe me out.  I didn't drive.  I have to ride up front, if I sit in the back seat I get car sick.  Always asking to sit in the front seat is a little embarrassing for me, but it beats the alternative.   Chemo made tolerance for that worse.

When I got home I had that fatigued feeling.  The same feeling I got when I was going through chemo, that tired worn out feeling.

Now being a 3 year survivor I would have thought that feeling like that would be gone.  But no, it isn't.

This time it was not.  The fatigue I felt felt exactly like chemo fatigue.  Feelings like that can bring you right back to a particular moment.

Remembering how shitty you felt, or looked.

Even after playing hockey this season, even after the two times a week pilates session I did in addition to the hockey.

I still have times when I feel like that.

I have to remember that it still takes time to heal from cancer, even after three years.

I have to remember that I still have to push myself sometimes to get back to where I was before.

Or push myself past that, to be better than I was.

That is the place I want to be.

Check out my podcast The Cancer Warrior on Empoweradio.com Available on demand and also available on Itunes.
Posted by Mel Majoros at 8:34 PM No comments: 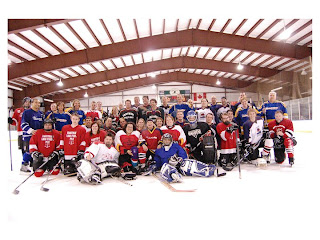 I play hockey.  That is not new to any readers of this blog. I played on a coed league this year.  Haven't played coed hockey since I lived in California, because of the expense, and I really wanted to try to get the women's hockey program of off the ground, but cancer had other plans.
So I really returned to the ice this year, in an organized hockey program.  Last time I hit the ice before this was 3 years ago
3 years.
I found out about my cancer right before the season started in 2007.   I remember telling my teammates, that I had cancer.  That was hard.  It was shocking, both to them and to me. At that point I didn't know what my course of treatment was going to be.
When I finally saw the surgeon and he told me I had to have a port put in I said, what I can't play hockey for two years?  I actually thought that!!  Isn't that crazy?  I know I have written about this moment many times, but that tells you what an important role hockey has played in my life.
So I really didn't know what to expect when I was told about this coed league.  Like I said before I had played in California.  There were a few women here and there, I had 2 female teammates on my first team I played on.  Some teams had no women on them.  Some didn't like women playing hockey.  There wasn't a sense of camaraderie within the league, only on our team.
The league manager does a draft.  He tries to put different levels of abilities of players together.  Its a C league, which means we have beginners and intermediates mostly, and some people who play very well interspersed within the teams.  There are 4 teams in this league.  I played on Hartman Law.
Now let me tell you this, in California, we had to buy our jerseys home and away, which was fine.  There is nothing like getting your first jersey with your name on the back.  Its an awesome feeling.  This being a small town that I live in now that is not the case.  They have sponsors for the teams.  So they have jerseys already made for the team, kind of a bummer, but that's ok.  I looked in the bin full of jerseys, found one that wasn't too big, it was #6.
I remember when I stepped onto the ice for the first game I felt shaky, it had after all been 3 years since I played, but it felt good. 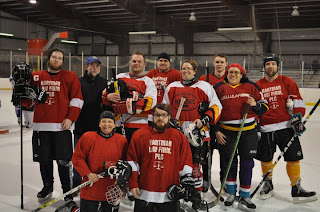 On the ice everything makes sense, you can take all your aggressions, frustrations, anger, happiness every emotion you have and use it to play.  Its a physical sport, and it can change in an instant with the bounce of the puck, a deflection or a pass. Its also a team sport. You can't win the game alone, you rely on your teammates.
We only played 9 games in the regular season, but I was grateful for every second on the ice.  We won 4 games lost one and tied 4.
We were in first place.
I didn't score a point in the regular season, and I wanted to so bad.  I had scored goals before when I played in California, and in the first game I played when I moved to Michigan, but I really wanted to score a goal or get an assist.
I didn't during the regular season.
We had a two game playoff.  The first game was close. We won
Holy shit, my team is in the finals.
I have never been on a winning team before.
Until now.
I don't know what the time was in the first period but I scored the first goal in our final game.
It was a one timer.
All I can remember is seeing the puck on my stick then looking up and seeing it hit the back of the net.
My first goal after cancer.  Awesome.
The game lasted 45 minutes.  Just a blip in time when you consider how long I was in treatment for.
45 minutes, and we played hard.
And won.
The cool thing about this league, is the cameraderie.  My team was happy I scored.
But so was everyone else.
Not everyone in the league knew of my battle with cancer, how hard I fought.
How hard I continue to fight during survivorship for myself.
How hard I fight for others, some I have met, some I never will.
The best thing about this season?
It has brought me closer to feeling like me. 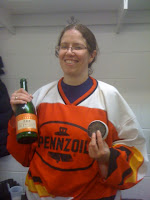 And its about damn time...
Mel is the producer/co~host of The Vic McCarty Show. Listen Live Monday~Friday 10am-noon eastern time on wmktthetalkstation.com