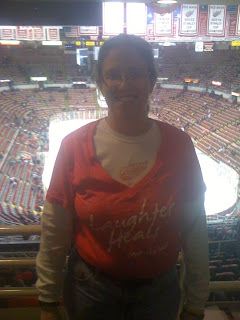 I had Bekki Nill on my podcast last year.  She is the wife of the Assistant General Manager of the Detroit Red Wings.  She is also a breast cancer survivor.  She invited me to the Hockey Fights Cancer night at the Joe Louis Arena.  Every hockey team has a HFC night.  It is " a joint initiative founded in December 1998 by the National Hockey League and the National Hockey League Players' Association to raise money and awareness for hockey's most important fight."   That is off of NHL.com.  Needless to say I am happy that the NHL sees the need for more funding going towards cancer, and if you can catch a hockey game in the process, well then I am all for it.

It was my first professional sports game I had been to since diagnosis, and the first game I had seen in a suite since I moved from California to Michigan.

Watching the teams warm up made me want to get on the ice and skate.  I hadn't played since March, and there is just something about the sport of hockey that speaks to me in a way that nothing else does.

I honestly and truly appreciate Bekki Nill's invitation to Hockey Fights Cancer night at the Joe.  Probably more than she realizes.


And it still helps me now through survivorship.

As I think of that night and look through the goodie bag full of stuff I will always be grateful to the Wings, and especially to Bekki, and her husband John for what they have given me, not the autographed Lidstrom puck or the pink hat with the Winged Wheel.

But for something more.


They keep me skating, and advocating.

Check out my podcast The Cancer Warrior on Empoweradio.com.  Available on demand and also available on Itunes.
Posted by Mel Majoros at 6:37 PM No comments: 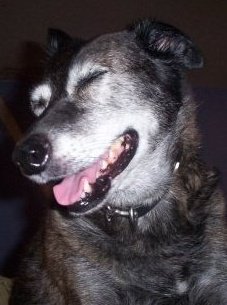 Having cancer isn't funny.  Everyone knows that.  It's a serious disease that takes so much from so many.

I have been blessed with a wicked sense of humor.  I get that from my Dad.  I remember when I was meeting with the surgeon to discuss my course of treatment I never thought I was going to die.  I thought wait, one year of treatment would mean no hockey!  Not usually something you think about when faced with a disease like cancer.

Humor and sports.  That's what got me through my treatment and still does through survivorship.  I remember someone who hadn't seen me for a while saw me while I was going through treatment and commented on how great I looked.  Since I was working out so hard for hockey season the docs said I didn't lose as much weight and went through treatment better than most.  I said "Cancer is the best diet I ever had!"  Some of those around me were shocked by what I said.  But I know that my sense of humor was going to get me through this.

That is why I love Save the Ta-tas and their message.  It makes me laugh, it brings awareness, and they donate proceeds to various charitable organizations.  Did you know that they have donated $690,0000 to charity to date?  This means that your purchase can help others.  Find out more on the Save the ta-tas site.

Because of the generosity of  Julia Fikse of Save the ta-tas I was able to pick out a shirt and one of my readers will win it. (just post a comment why you like the ta-tas brand) I am hoping that the sense of humor will help you through your survivorship as it did mine. 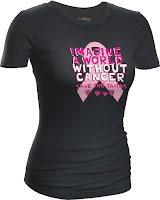 Imagine a world without cancer.

Check out my podcast The Cancer Warrior on Empoweradio.com Available on demand and also available on Itunes.
Posted by Mel Majoros at 3:09 PM 12 comments: