The word “cancer” sends chills of fear down the spines of just about anyone – but it might be most terrifying for a parent who hears the diagnosis for his or her child.

That was the case for the Harless family. An MRI at the Riley Hospital for Children at IU Health revealed their worst fears: the source of the back pain that their two-year-old son, Holden, had been complaining of was a spine tumor, not constipation as one doctor wrongfully diagnosed it.

But today, Holden runs around the family farm with the energetic abandon of a healthy eight-year-old.  He’s a heroic survivor and an example of the many triumphs being celebrated at the Riley Hospital for Children Cancer Center, the only such facility in Indiana and a recognized national leader in clinical care and research in cancers that affect children.

According to the National Cancer Institute (NCI), fewer than two American children out of every 10,000 under age 15 develop cancer. While relatively rare for children, cancer is still the second leading cause of death for Americans 1 to 14 years of age, after accidents. The American Cancer Society reports that in 2007, about 10,400 American children under age 15 were diagnosed with cancer and that about 1,545 children die from the disease each year.

Cancers of the central nervous system (CNS)—the brain, brain stem and spinal cord—are the second most frequent malignancy affecting children, and are more common in those under 7, like Holden. And the prognosis for children diagnosed with CNS cancer is less favorable than for other forms of childhood cancer, such as acute lymphoblastic leukemia.

Understandably, “terrifying” is the word Holden’s mother uses to describe the moment she heard his diagnosis. Even more frightening was the choice she faced: allow Holden to undergo surgery, or expect that in six months, without surgery, her son could be paralyzed and never walk again.


Survival rates of children with cancer are on the upswing, according to a study by the Centers for Disease Control and Prevention. Childhood leukemia death rates fell by 3% a year, from 1990 to 2004, the study found, compared to 1% a year for childhood brain and other nervous system cancers. The CDC says improved treatment of childhood cancers is the likely reason for this.

All Mrs. Harless knows, and is thankful for, is that after Holden's surgery, “Dr. Jodi said Holden had done great and that it went better than she could have hoped for. All the doctors were great there. The physical therapists, the neurosurgeons, everyone was phenomenal. I can't thank Riley enough for what they did for Holden. They gave us our family and basically his life."

About the Author:  Jon Dawson is an attorney and professional writer in Indianapolis. He has first-hand experience with pediatric cancer as he lost his sister to the disease. Jon writes on behalf of IUHealth and also contributes to several blogs including www.DoseOfMyOwn.com. 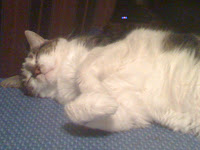 A song that I learned when I was a kid.  I had this stuffed toy, a white french poodle with a music box inside that played that song "Are you sleeping?, Are you sleeping?, brother John, brother John, Morning bells are ringing, Morning bells are Ringing, din dan don, din, dan, don"
5 years of high school french and this is what I remember.
Ironic.
But relevant.  I asked my Doc at my last checkup what could be making me tired.  She did the full round of tests thryoid, vitamin D etc.  Everything checked out.  Another mystery.
So then I began thinking ok, is this just residual side effects from chemo, radiation or who the hell knows what?
I do have chemobrain.  I know this for a fact.  Nothing better than looking like an idiot at the grocery store when the clerk asks you paper or plastic and you are looking right at the bags and the answer escapes you.
Ok side effect, sure, could be, but what could make me so damn tired?
Maybe I push myself too hard?

Go to bed too late?


All of the above?


None of the above?

The meds I take to manage my "major depressive disorder" fancy word for depression make me tired.

I have to take effexor with food or else it will make me dizzy.

So I take it when I eat either at breakfast or at lunch.

About an hour and a half after that I start to get tired.

Now its a good thing I work at a radio station and not guarding the missiles in this country, or else we may be in trouble.

I can't stop taking Effexor because I would rather be tired than depressed.

But being tired and fatigued reminds me of when I was going through chemo, and it scares me a little

All those what ifs.

What if its not the meds?

What if the cancer comes back?

You can't live your life in what ifs.

And unfortunately you can't live your life nap to nap.

People don't understand side effects, people who don't have to deal with them anyway.

The meds also give me insomnia.

So I nap when I am tired then I try to sleep and sometimes I can't.

I know it sounds like bitching or whining, but its not.

If you don't deal with side effects or what are called invisible illnesses, a great website started by my friend Christine Miserandino called   But you don't look sick

So if you see me up late online wondering "Man, does she ever sleep?"

Now you know the answer.

Posted by Mel Majoros at 9:01 PM No comments:

Posted by Mel Majoros at 8:37 AM No comments: